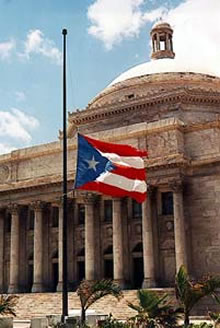 Vieques is part of Puerto Rico, which is a self-governing commonwealth in association with the United States.
It is an island municipality. The mayor is the highest elected official.
The chief of state is the President of the United States of America. The head of government is an elected Governor. There are two legislative chambers: the House of Representatives, 51 seats, and the Senate, 27 seats.

Puerto Rico has authority over its internal affairs. United States controls: interstate trade, foreign relations and commerce, customs administration, control of air, land and sea, immigration and emigration, nationality and citizenship, currency, maritime laws, military service, military bases, army, navy and air force, declaration of war, constitutionality of laws, jurisdictions and legal procedures, treaties, radio and television--communications, agriculture, mining and minerals, highways, postal system; social security, and other areas generally controlled by the federal government in the United States. Puerto Rican institutions control internal affairs unless U.S. law is involved, as in matters of public health and pollution. The major differences between Puerto Rico and the 50 states are its local taxation system and exemption from Internal Revenue Code, its lack of voting representation in either house of the U.S. Congress, the ineligibility of Puerto Ricans to vote in presidential elections, and its lack of assignation of some revenues reserved for the states.
The main income of Vieques, after the Navy left, comes from construction, tourism and a General Electric Plant, which has been there since the late 1960's. There are very few natural resources which can be economically exploited.